The Corporations Act Section 249S previously allowed shareholders to hold meetings at “two or more venues using any technology” as long as the members were given a reasonably ample chance to participate. This also implies the permission to allow hybrid meetings that happen in several venues, linked up by various audio and video means. This section has been repealed by the latest Corporations Act 2001, which has brought forth new provisions in laid out Section 253Q Virtual Meetings. If you are planning to hold an AGM online,here’s what you need to know about the new legislation Section 253Q Virtual Meetings:

Australian companies were allowed to hold virtual meetings in response to the limitations brought by the pandemic. The Amending Act removes the potential concerns regarding the legal efficacy of such virtual meetings, facilitating the use of proper electronic means to host the meetings.

The Amending Act includes additional provisions giving emergency relief powers to the Australian Securities and Investments Commission (ASIC). Under the new regulations, the ASIC can now do the following:

Unlike the other provisions, these additional powers are granted to the ASIC on a permanent basis.

The Amending Act has provided more detailed instructions when it comes to planning AGM virtual meetings.

For virtual meetings, the members as a whole shall be given a reasonable opportunity to participate. As such, the meeting shall not be invalidated in case of a member encountering technical issues, therefore missing parts of the meeting or being unable to participate.

Sending notices of the meeting and other relevant documents, such as for proxy voting, can be done electronically. This includes giving the documents through electronic communication, as in via email, or through other electronic access such as a website link.

Under the new regulations, all voting processes in a shareholder meeting held using virtual meeting technology shall be conducted via poll, unless provided otherwise by the company’s constitution. All virtual meetings are also required to provide all meeting participants who are entitled to vote with the opportunity to cast their votes in real-time.

The members as a whole are to be given ample opportunity to exercise their right to participate, which includes asking questions and making comments. They can do so orally or in writing, in which case the virtual meeting technology should have a feature that enables such.

Get the best service and platform for your AGM virtual meetings with Vero Voting.

We guarantee seamless, efficient, and secured virtual AGMs. Send us your inquiries and we’ll give you a run through about our services.

Best Practices on How to Run AGMs Virtually

In order for companies, investors, and shareholders to maximise this tool, here are 5 practices to successfully run virtual AGMs. 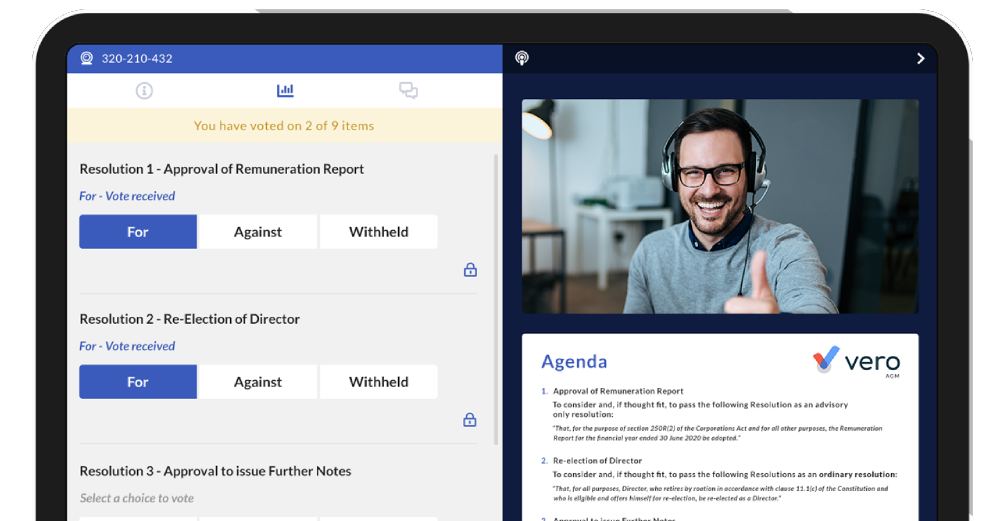 One key factor of running a successful online event is having a third-party software provider on where to host the event. How To Choose An Online AGM Voting Provider

In this pandemic, businesses are adapting to technology. Here’s a list of requirements to look for your online voting AGM provider.